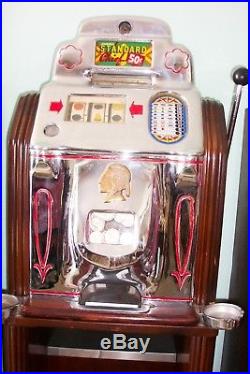 Offered for sale is a rare, One of a Kind set of five O. Jennings and Company Standard Indian Chief slot machines dating from 1949. A must for the discriminating collector's game room. Treat yourself or the one you love to their very own casino just in time for the Holidays!

They currently have a rare and unique Mills Dewey-Chicago Triplet Slot Machine for acquisition. The machines were last used at O'Dwyer's Casino, a clandestine casino that operated illegally in New Orleans until it was raided by the FBI headed by J Edgar Hoover. O'dwyer's opened in 1949 and operated until 1952 and was located in a large mansion in the suburbs of New Orleans at 100 Jefferson Highway. Provenience of these slot machines is documented in a sworn affidavit which will accompany the sale. These slot machines are part of the Monte Carlo Collection owned by Mayor Ralph James.

We are settling his estate. The collection has a 1920's Craps, Roulette and Black Jack Tables and are offered independent of these slot machines by Alberto Guerrero of Iconic Design in Miami, Fl. This collection was stored by the late Jim Garrison in the warehouse district of New Orleans after the ban and subsequent crackdown on gambling. In 1987 the collection was acquired by Ralph G. James after he relocated to New Orleans and renewed a friendship with the late District Attorney, Jim Garrison. Garrison rocketed to fame when he challenged the Warren Commission's finding that Lee Harvey Oswald acted alone when he assassinated JFK. Garrison found connections in New Orleans to another man who was at the assassination in Dallas. His disclosure of these facts brought to light the Oliver Stone "zaprurder" film, JFK. James had been Mayor of Wildwood, New Jersey for 12 years and headed the Eastern Division of the GOP for just as many years. He was a well respected politician, entrepreneur and philanthropist. Just one coin in the viewing panel of the slots could be worth more than the asking price. You can own a piece of history and give it a fabulous future. PLEASE NOTE: IT IS LEGAL TO COLLECT AND OWN GAMING EQUIPMENT, FOR THIS CATEGORY, ANTIQUE IS CONSIDERED ANY ITEM OVER 25 YEARS OLD.

Jennings 1949 set of 5 Indian Chief One Arm Bandit slot machines" is in sale since Sunday, December 2, 2018. This item is in the category "Collectibles\Casino\Slots\Machines\Antique Coin Slot Machines". The seller is "montecarlocollection" and is located in Boynton Beach, Florida. This item can be shipped to United States.