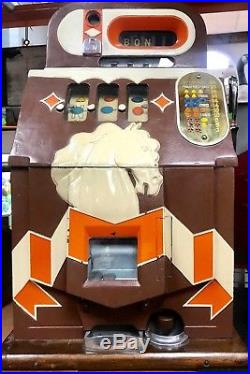 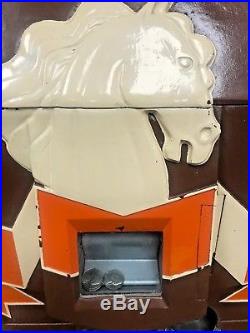 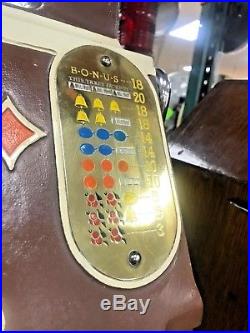 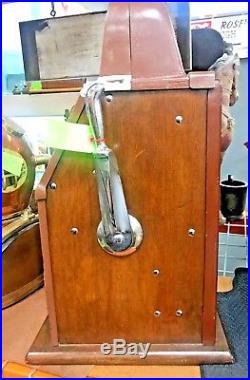 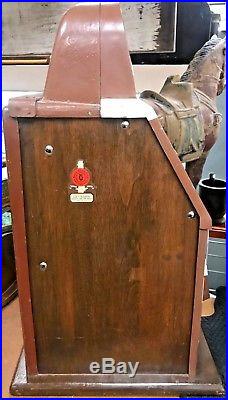 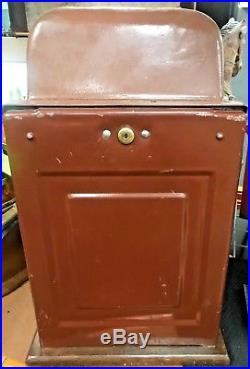 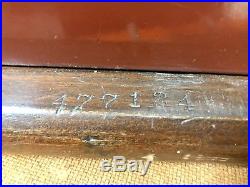 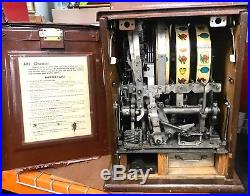 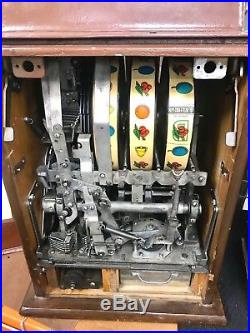 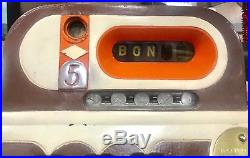 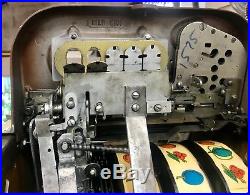 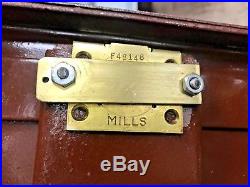 Unit is calibrated correctly and operates perfectly. Has original Mills back door lock and key. The Horsehead Bonus slot machine was one of Mills Novelty Company's most successful. It made its debut in 1937 and was produced until late in 1942 when.

Mills factory in Chicago converted to wartime production and stopped making slot machines until the war ended in 1945. The idea behind the bonus feature was to entice the player with a chance to build up letters and win an 18 coin payout when the word BONUS was completed. The letters that spell B-O-N-U-S are superimposed over the regular fruit symbols on the first (far left) reel.

When the reel stops on one of the letters, that letter will be added to the top bonus display on the top of the machine. The catch is that the letters of the word BONUS must be spelled in sequence in order to advance. In other words, if the player has B-O-N- appearing in the bonus display, he needs to hit a U to advance a letter on the display. If the player hits an S, it will not score until he hits a U first.

The machine pays out 18 coins when BONUS is completed and with the next coin deposited the display will reset and remains blank until a B is hit etc. Some pre WWII Mills Slot machine m. Odels were re-introduced after the war but the Horsehead Bonus was not one of them.

This was due to Mills deciding to market a new Bonus slot machine in a newly designed case with sleek modern aircraft-influenced design which became known as the High Top Bonus model. This new model used the exact same mechanism as the older Horsehead versions with the exception that the new machines paid out on one cherry while the pre war machines required a minimum of two cherries for a win. This particular machine was one of the last Horsehead Bonus Bells produced. Because of restrictions on materials after the war started, Mills co.

Uld no longer produce slot machines with cast aluminum cases which all of their slots. So Mills was forced to either use wood or cast iron. They chose to make the last of the Horsehead Bonus slot machines with cast iron front castings and rear bonnet (the piece behind the coin head). The cast iron machines had to have their serial numbers stamped into their wooden base rather than on the top of the front casting like the cast aluminum versions had. (see pics) The big disadvantage with cast iron, aside from it being subject to magnetism and rust, was its sheer weight.

The cast iron machines were quite heavy but due to their weight, they played noticeably more smoothly than the lighter cast aluminum machines. Another difference with the cast iron versions are that they do not have the small removable metal side plate that allowed for a mint vendor to be attached. The most noticeable difference is the paint scheme which is quite different from the aluminum cased machines. The horse head on the front of the cast iron machines were painted with enamel because the cast iron could not be buffed out and polished like on the aluminum versions.

This machine looks like it may have been repainted at one time but in the original color scheme. The item "Five Cent / Nickel 1942 MILLS HORSEHEAD BONUS Slot Machine Rare Cast Iron Case" is in sale since Sunday, October 21, 2018.

This item is in the category "Collectibles\Casino\Slots\Machines\Antique Coin Slot Machines". The seller is "oddioaudio" and is located in Roseville, California. This item can be shipped to United States.